[40] … Just as Jonah was three days and three nights in the belly of the great fish, so will the Son of Man be three days and three nights in the heart of the earth. [41] The men of Nineveh will rise up at the judgment with this generation and condemn it, for they repented at the preaching of Jonah, and behold, something greater than Jonah is here. (Matthew 12:38-41 ESV)

Today is a busy day for many people. Neighborhood Easter-Egg Hunts, extra church Easter services, family get-togethers, you name it. There is a tendency to honor Good Friday and then immediately prepare for Easter with little to no attention given to Holy, sometimes called, “Great,” Saturday. Many of us have probably never even heard of such a thing. This is because Western Christianity has typically only observed Good Friday services concerning the crucifixion and Easter Sunday services celebrating the resurrection. If there are services on Saturday, they probably fall on Saturday night in the form of an Easter vigil or, “The Great Vigil of Easter,” which usually culminates in a midnight procession into a well lit sanctuary with the proclamation, “Christ is risen! He is risen indeed!”

It does do our hearts good to celebrate the glory of the resurrection even as the clock strikes midnight on Easter Sunday morning. This may serve to remind us that, “weeping may endure for the night, but joy comes in the morning” (Ps. 30:5b).

But amid all the hustle and bustle and the rush toward Easter morning with candy at the ready and hams basted and bound for the oven; do we ever stop to think of the day when the very agent of creation, the Word of the Father whose power created all things and sustains all things was silent in the grave in the person of Jesus Christ?

One old gospel song says, “living he loved me, dying he saved me, buried he carried my sins far away…” O what joy and bliss it is to know that our sins, the very curse that was upon us was subsumed in the very person of Jesus Christ whom God “crushed for our iniquities.” Not only that, but that very curse was locked up in chains forever never to emerge from the darkness of that tomb.

When creation was finished and the blessed Trinity rested from their work, it was a well-fitting rest not of weariness or tiredness, but of completion and satisfaction. How fitting and poignant is it then that our Savior who had cried, “It is finished!” should rest soundly within the tomb, the new creation inaugurated and the his work complete. How fitting is it that the Father would see the the suffering of his only Son, his wrath forever absorbed for those whom he had given to the Son, that he should say yet again, “it is good,” and then rest.

In the confrontation quoted earlier form Matthew 12, Jesus was pointing to something about the prophet Jonah with which he would identify. Why else would he compare himself to the prophet and then proclaim, “something greater than Jonah is here”?

We often see the great fish that came to swallow Jonah as a means of God’s punishment, a sign of his judgment against Jonah, and a way of disciplining Jonah for not obeying him. We think of Jonah’s prayer as being one for deliverance from the great fish. After all, he prays: 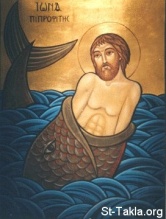 That doesn’t match the Sunday School felt-board lesson does it?

Sure, Jonah was praying concerning his deliverance from the “belly of Sheol,” but that “belly” is not referring to that of the fish, but that of the “deep,” the belly of death itself, a death which was almost certain for Jonah when he was thrown overboard in the midst of a great storm. Jonah says, “you cast me into the deep, into the heart of the seas” (v.3a).

Far from an instrument of mere punishment and of discipline, the great fish was a means of God’s deliverance.

As you prepare to enjoy this Saturday before Easter, take time to ponder on the very agent of all creation, the Word of God himself, lying silent in the grave… along with your sins.

But also remember that the Spirit of God was “hovering” (Gen. 1:2) yet again over what seemed to be chaos and turmoil, ready to breathe the glory of the resurrection into the man Jesus’ lifeless body.

Hear the last words of Jonah’s prayer from the belly of the great fish and juxtapose them now as you remember the Lord of Life silent in the tomb:

[6] I went down to the land whose bars closed upon me forever; yet you brought up my life from the pit, O LORD my God. [7] When my life was fainting away, I remembered the LORD, and my prayer came to you, into your holy temple. [8] Those who pay regard to vain idols forsake their hope of steadfast love. [9] But I with the voice of thanksgiving will sacrifice to you; what I have vowed I will pay. Salvation belongs to the LORD!” (Jonah 2:6-9 ESV)

One thought on “Jonah and Holy Saturday”