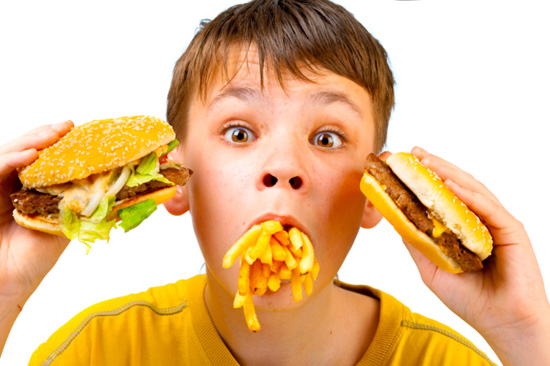 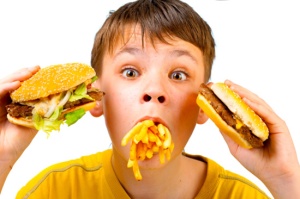 When I was younger, I couldn’t wait to go to church on Wednesday nights. Wednesday nights were the highlight of my week and became more anticipated in my mind than even the weekend. Why? Because on Wednesday nights, our R.A. (Royal Ambassadors… Boy Scouts for Southern Baptists) director simply packed up the van and took all of us boys to McDonald’s. We’d order a round of Happy Meals and then just play on the indoor playground for a good hour and a half. I thought it was the greatest thing ever! What little boy wouldn’t?

You can imagine why I thought it was so strange when my dad became irritated over our wonderful Wednesday night program (well… I thought it was wonderful anyway). I remember him getting frustrated and saying, “we don’t come to church just to eat Happy Meals and play.” Of course, I understood the significance of that statement and in my heart I knew he was right; but my 7-year-old self didn’t want to admit that… I just wanted my McNuggets.

I am reminded of those trips to McDonald’s every time I come in contact with or hear the latest trend in “doing church.” It is a well known and established fact that there is an enormous and cataclysmic “drop-off” after high-school in terms of going to church or even remaining in the Christian faith (or any faith for that matter). Those within most evangelical churches are convinced that this is because of militant atheists and agnostic philosophies within the colleges and universities these students will attend. While some of this is true and certainly contributes to doubt and unbelief on the part of these young people, there is something more serious underneath the surface that creates a petri dish for the growth of unbelief and disillusionment. A shaky foundation makes for a house that’s easy to blow over.

But what has that got to do with McDonald’s, Happy Meals, and play time?

At some point in the past fifty to sixty years, we became convinced that in order to attract people (especially young people) to the church and Christianity, we needed to do special, unique, and non-traditional things in hopes of “reaching them where they are.” “Children’s Church” came into play and separate “youth groups” or “youth churches” were established as a way of separating young people from the “droopy” traditionalism of “big church.” In fact, being sent to this so-called “big church,” was often used as a threat of punishment for misbehaving in Children’s Church. We diluted our messages under the pretense of being “relational,” and “practical,” and came out on the other side with little more than moralistic dribble more reminiscent of an after-school TV special than biblical discipleship; We shunned good, solid hymns and theologically rich worship songs in favor of catchy, shallow choruses that made our worship services more akin to The Wiggles than Colossians 3:16; And we hid the Sacraments away as if they more like an embarrassing family member than vehicles of God’s grace. In other words, we took corporate worship, the life-giving preaching of the Word of God, the richness of singing the faith to one another, and the mysteries of God’s grace in Baptism and the Lord’s Supper, and we replaced them with play time and a Happy Meal. 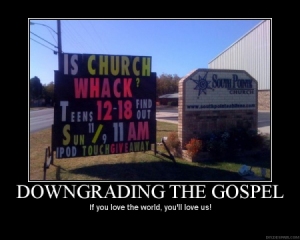 For too long now, our children and young people (and now our adults) have been subjected to trite, pathetic, anemic, and utterly powerless forms of so-called “Christianity” under the pretense of “attracting” a new generation. When planning worship services today, we’re more likely to look at the surrounding culture for our marching orders than to the Scriptures. In fact, it would seem rather odd for any amount of Scripture to be read publicly in most evangelical worship services (save for the two or three verses referred to by the speaker during his sermon… err… talk). Children are shovel-fed moralism and niceties with Jesus as a nice example while singing songs that suggest that God is their “buddy” with little or no reference to the basic truths of the gospel that make such a “friendship” even possible. As they graduate from Children’s Church to “Youth Group,” things don’t improve all that much. Instead of maturing young people into responsible young adult church members with accountability and responsibility within the local church, we feel compelled to continually appeal to their adolescent nature by perpetuating more “growny” forms of Children’s Church. They may be too old for the puppet “ministry,” but the promise of games, food, and “fun,” trump any attempt to actually disciple young people, let alone teach them the deeper things of the faith.

After decades of pandering to our children and youth and seeing them completely fall off the map after high-school, it seemed once again that the problem with young people and church was… well… church. College services and entire church bodies for college and university students have erupted over the last twenty-five years and little has changed from the youth group days. Sure, they’ve grown up a bit, they’ve matured a little. They may have no time for puppet shows and silly youth-group games, but they’ve got their own tastes now. Still allergic to “traditional” church, these ministries thrive on being “relevant,” “pracitcal,” and “applicational” at all costs. Visual art and media are a central component. Doctrine is still eschewed like a dirty-word and the Sacraments… what are those anyway? As to the concept of the local church and their place within it… nonexistent. 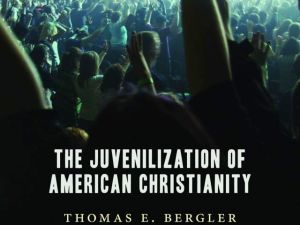 Worse yet is the effect all of this has had on the Church in general. Those adults that actually did “keep the faith” through their high-school and college years were nevertheless fed this dribble from the time they were children. So what do you think becomes of corporate worship and the local church? It’s been made to suit their stunted juvenile tastes. Adults, raised on trite Children’s Churches and meaningless youth services, are now naturally bored with actual church, you know, the preaching of the Word and the administration of the Sacraments. In fact it’s an epidemic that’s been labeled “The Juvenilization of American Christianity.” We just refuse to grow up. We’ve been fed Happy Meals for so long that we no longer have a taste for real food.

Author A. Daniel Frankforter put it this way in his book, Stones for Bread:

With all of our attempts to appeal to children, young people, and young adults, we’ve just missed the point and the problem entirely. Sure, young people drop off the map by the thousands due to atheistic and agnostic indoctrination in college. But college and atheistic professors aren’t the main problem here, the foundation is. In many cases, all we’ve ever given to our children and young adults is a Happy Meal and play time. We’ve tried relentlessly to follow the culture and to appeal to every felt-need we discern from the current generation even at the expense of sound biblical teaching and a proper understanding of the local church. We think that young people want us to be “relevant,” and “cool,” when in reality what they want and need is a solid truth that anchors their souls in a world of questions and suffering. Instead, we’ve raised spiritually fat little brats chock full of Happy Meal, fast-food Christianity with little more to show for it than a cheap toy and heart disease. No wonder they fall away by the thousands when the real world, real problems, real challenges to their faith, real wars with sin, and real life find little or no answer from their shallow faith.

At the end of the day, the strategy must be giving our children and young people what they need rather than simply what they want. By no means must we throw out all fun and games and frivolity, but we must come to understand that our young people need far more than they can possibly perceive. We must be the adults that come along side of them and train them in godliness and in sound doctrine. Fun has its place, but without this kind of discipleship, we’re doing nothing but building a foundation of sand… and we know how that turns out (Mt. 7:24-27).

It would be a very poor parent indeed that did not make their child eat their vegetables, go to school, and do their homework. These things aren’t always very fun, but it makes sense that we sometimes make children and young people do what is not necessarily the funnest or coolest thing because we know it is the best thing. Likewise, it would be a very poor church indeed that refused to feed their congregation (of all ages) the solid meat of God’s Word and instead settled for Happy Meals, play time, and a cheap toy from China. 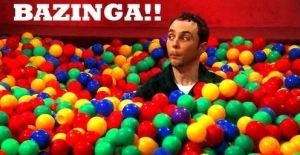 You Lost Me: Why Young People are Leaving the Church… and Rethinking Faith by David Kinnaman

One thought on “Happy Meal Church”