In the previous posts we have seen the Apostle Paul lay out for us the grand scheme of salvation according the infinite love, wisdom, and mercy of God.

It is this God, “the Father of our Lord Jesus Christ” (v.3) who serves as the grand architect and designer of our great salvation. In his eternal wisdom and grace, he has sovereignly elected a people for himself. Out of the mass of humanity headed for their rightful punishment for sin; God has acted to rescue his own.

Because of God’s eternal decrees of election and predestination, the Lord Jesus Christ, the eternal Son of God stepped down out of glory into space and time to accomplish the salvation that God the Father had eternally orchestrated. Through his death on the cross, that eternal decree was actuated and the foundation of our salvation was laid forever.

All of this, Paul reminds us, was done in order that God might get glory for himself. That is through his eternal decree of salvation and the wonderful gospel of his Son Jesus, God was at work saving a people for himself, forgiving their sins, and making them his forever. All of this was “according to his purpose” (v.9) so that he might eternally display his “glorious grace” for the worship and wonder of the entire universe (v.6).

In verse 11, Paul wishes to introduce believers to yet another blessing of being in Christ. Not only have we been predestined to belong to God; not only have our sins been forgiven through the death and resurrection of Jesus the Son; but we have been made heirs with Christ!

Wouldn’t it have been enough to have been chosen by God and to be acquitted of our sins through Christ’s death even if it only meant avoiding an eternity in Hell? Of course it would! That would be grace upon grace.

But God does not stop in simply forgiving us of our sins and rescuing us from damnation; but he actually gives us something in Christ.

Notice that we have “obtained an inheritance.” That is that we are receiving something from God. Something that does not belong to us; but something that he is giving as a gift. Also note that this is something that is given to one’s own children. An inheritance in this day would have been reserved for family members; most notably, the firstborn son. This was the recipient of the inheritance, the blessing of the family, and the headship that went along with it.

We should quickly recall that we are only recipients of the blessing of sonship with God through adoption (v.5); a blessing that we could never deserve.

Also note the location of this blessing of inheritance. It is “in him”; That is, in Christ. Again, notice the list of prepositional phrases that riddle this entire first chapter; ensuring that believers don’t miss the point that the wonderful blessings of God’s salvation only come in, with, and through Jesus Christ. And so to remind us of the nature of this adoption, Paul drops a “call back” to the foundation theme of predestination. That is to say that we have been adopted into the family of God through Jesus Christ and that this adoption was decreed and settled before the foundation of the world.

None of this is by chance. Also, none of this depends on our own counsel or will. It all flows solely from the eternal wisdom and sovereignty of God who works all this according to the “counsel of his [own] will” (v.11).

What an immeasurable blessing! To be adopted into the family of God. And this is no second-class adoption whereby we simply recap the leftovers of the older brother; this is a full citizenship into a new family. We have been adopted in Christ, our older brother, and have been made co-inheritors with him! And this is no mere byproduct of God’s eternal plan; this is God’s eternal plan. This was his intention. All so he might get glory for himself for his immeasurable grace and mercy toward us who deserve only his wrath (v.12).

What a glorious truth! We who deserved only God’s wrath and condemnation are welcomed, received, and adopted through Jesus Christ. This was according to the eternal plan of God that he purposed within himself before the universe ever existed. Through faith in Christ, we as individual believers are swept up into the eternal, cosmological story of God; the story that he wrote before time itself.

Furthermore, we have been counted as his sons and daughters and heirs of his Kingdom. That right which belongs to Christ alone by nature is ours through adoption in Jesus Christ.

Paul closes this section by  assuring believers of the security and certainty of this inheritance through Jesus Christ.

We have seen that the Father is the grand architect behind the plan of salvation; working in the acts of election and predestination to write the story; We then see how Jesus Christ comes as the main character of that story, putting the Father’s plan into action and purchasing the salvation that was predestined in eternity past; Now we come to the role of the Holy Spirit who takes the Father’s plan and the Son’s redemption and applies it in real-time and space to sinners as they come to faith in Jesus through the gospel.

The Father’s plan was written in eternity past. The Son’s redemptive actions occurred in time and space as a matter of historical fact. Now the Spirit’s work comes as individuals “[hear] the word of truth… and [believe] in him [Jesus]” (v.13).

At that moment, through faith in Christ, the Holy Spirit “seals” us as sons and daughters and covenant heirs of the Kingdom of God. Though this certainly conjures ideas of security and certainty in our salvation (see also Eph. 4:30), the primary image here is one of ownership and identification. That is to say that as the Father has planned to adopt you and as the Son comes to redeem you; so the Holy Spirit comes in power to claim you and to brand you as that which you have been predestined to be… a child of God. This is a royal signet of the Most High King as a testament to the cosmos that we belong to God.

Notice also the means of receiving this seal. Again, Paul is quick to begin with the prepositional phrase, “in him,” so as to set Christ as the primary agent from the get-go. So, “in Christ,” as one hears the gospel and responds in belief (faith and trust), they receive the mark of God’s ownership so that which was predestined in eternity past is brought to fulfillment in time and space in the individual life of every person who comes to faith in Christ.

But there’s more. Notice that the Spirit is not merely the agent of this seal and sign; but is himself the seal and sign! Yes, none other than God himself, by his Holy Spirit, is our seal and mark of identification. This comes to glorious life as the Holy Spirit fills the new believer, baptizes them into the Body of Christ, and begins the lifelong work of sanctification. Paul says that “he,” the Holy Spirit, is the guarantee of the wonderful inheritance we talked about earlier. It’s not merely some external mark or identification; but the Spirit himself rests on us, bring surety to the fact that we belong to God and that we will inherit God’s Kingdom through faith in Jesus Christ. 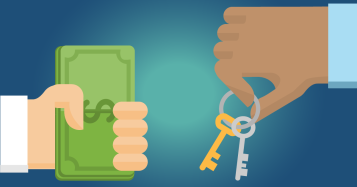 This guarantee is an economic term referring to an earnest, a down-payment. We call it “earnest-money” because it demonstrates the seriousness of intent on behalf of the buyer. It is the percentage one puts down on a house, car, or another large purchase that establishes security, collateral, and intent to buy. It provides ownership in the purchase so as to secure the finality of the payments in due time. So it is with the Holy Spirit who fills every new believer and immediately begins conforming them into the image of Jesus Christ. This is the down-payment, the earnest-money, which demonstrates God’s intent to fully save us when we come to glory.

How wonderful to know that the seeds of eternity, the earnestness of God himself, has already been deposited into believers by the working of the Holy Spirit through faith in the gospel. This Holy Spirit himself is the assurance of the inheritance that God promised us in eternity past through Jesus Christ.

How fitting to conclude with a reminder of why God has done these things: “To the praise of his glory.”

From eternity past unto eternity future (if we can apply tense to eternity), the miracle of salvation has been from God, for God, through God, and ultimately, to God.

He predestined us according to his own counsel… for his own glory.

He sent Christ to redeem us through the gospel… for his own glory.

He will one day rescue us from the very presence of sin… for his own glory.

“So that in the coming ages he might show the immeasurable riches of his grace in kindness toward us in Christ Jesus.” (Ephesians 2:7 ESV)